With civilian space travel now occurring on a seemingly regular basis—seven rockets with civilian crews and passengers launched in 2021 alone— the expertise of Dr. Richard Moon is uniquely in demand. Moon serves as medical director of the Duke Center for Hyperbaric Medicine and Environmental Physiology (CHMEP), as well as director of the Anesthesiology, Surgery, and Environmental Physiology Study Program (ASEP) at Duke. His knowledge is sought after to ensure that civilian crews can safely enter and conduct a mission in space.

“We are one of the few facilities that can do this,” Moon said. “We have altitude capability, we have an active lab, we have recompression facilities—we’ve been in the business for a long time.”

The facility is internationally recognized for its research in the areas of carbon monoxide poisoning, diving physiology, decompression sickness, oxygen toxicity, and altitude physiology. Moon has been with the center since 1979, specializing in the study of cardiorespiratory function in humans exposed to environmental conditions ranging from 2,250 feet of seawater depth to high altitude. His work also touches on gas exchange during diving, the pathophysiology of immersion pulmonary edema, the effect of anesthesia and postoperative analgesia on pulmonary function, and monitoring tissue oxygenation.

“I have always been interested in the physiology of extreme environments—hypoxia, altitude, diving,” he said. “I came to Duke because of the work that the university had been doing and because of the lab facility—Duke was a natural fit for me.”

The combination of Duke’s facilities and Moon’s expertise makes the center the right fit for space crew training exercises, as well, specifically hyperbolic training that simulates the sensation of a loss of cabin pressure that could trigger hypoxia, or a lack of sufficient oxygen.

“We train for the possibility of a leak in the cabin, in which a space crew would experience a reduction in pressure - that could produce decompression sickness as well as hypoxia,” Moon said. “Symptoms of hypoxia often happen insidiously, and the danger is that people can be unaware of what’s going on.”

Hypoxia can cause unconsciousness, but before that happens, those suffering from the condition may experience symptoms such as shortness of breath and confusion. Loss of pressure in aircraft flying at high altitude has resulted in pilots losing consciousness safety maneuvers. Moon refers back to 1980 when the LSU football coach, Bo Rein, was flying in a private aircraft from Shreveport, Louisiana to Baton Rouge, a 40 minute trip. However, inexplicably his aircraft climbed to 40,000 feet and headed east. The plane was eventually intercepted by an Air National Guard fighter aircraft over North Carolina at 41,600 feet—6,600 feet higher than its maximum certified ceiling. The military pilots could not see any sign of life in the cockpit and the aircraft continued to fly over the Atlantic and crashed when it ran out of fuel. Presumably, the pilot became hypoxic, failed to notice this, and did not begin breathing oxygen—a scenario that Moon’s training aims at helping civilian astronauts recognize and avoid.

During training of a crew, Moon will seal them in the hyperbaric chamber and simulate being at an altitude of 25,000 feet. The astronauts may be asked to perform a series of tasks, from simple arithmetic to playing with a child’s toy that requires them to insert pieces of different shapes into their corresponding holes. Initially, Moon will have the crew breathe 100% oxygen via mask; each one then in turn removing their mask to initiate hypoxia for a brief period while they attempt the tasks. As the crew works, Moon will trigger hypoxia by having them remove their masks to breathe air.

“When at sea level, crews can typically accomplish these tasks in just a few seconds,” he said. “But when they become hypoxic, it becomes quite evident that they aren’t doing so well.” 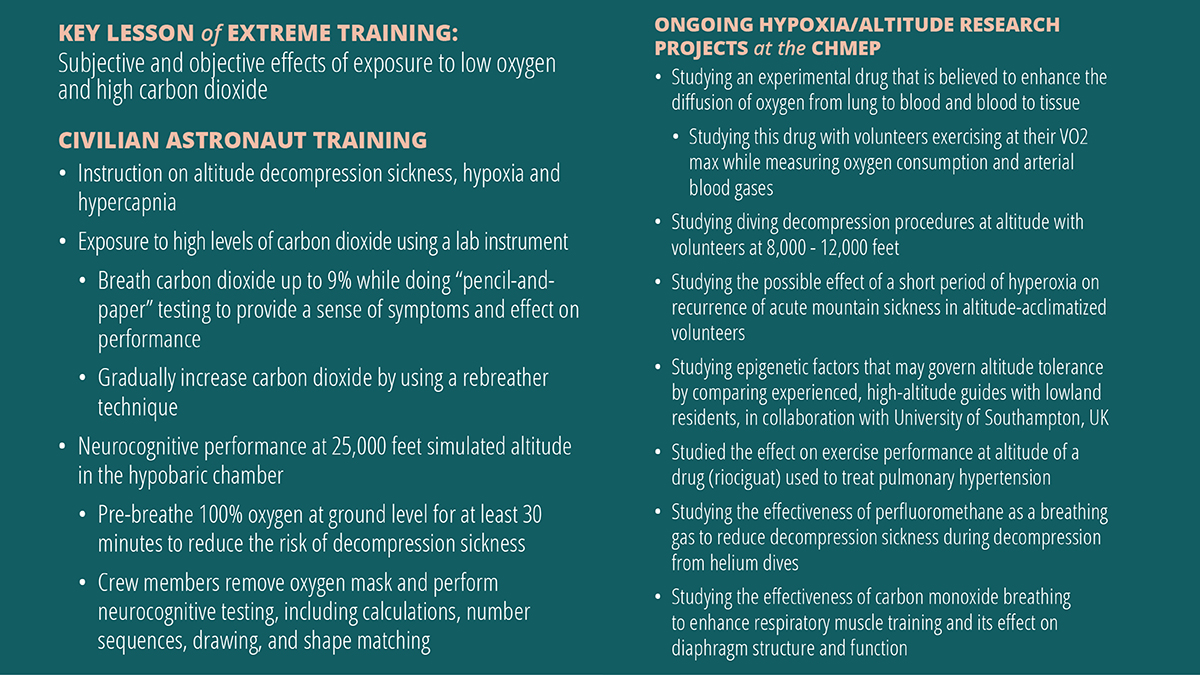 Moon’s exercises are designed to familiarize crews with the symptoms of hypoxia so they can react and supplement their oxygen supply before losing consciousness.

“It’s important that people recognize that hypoxia is occurring and start some measures to alleviate it,” Moon said. “It’s critical that they feel what it’s like.” 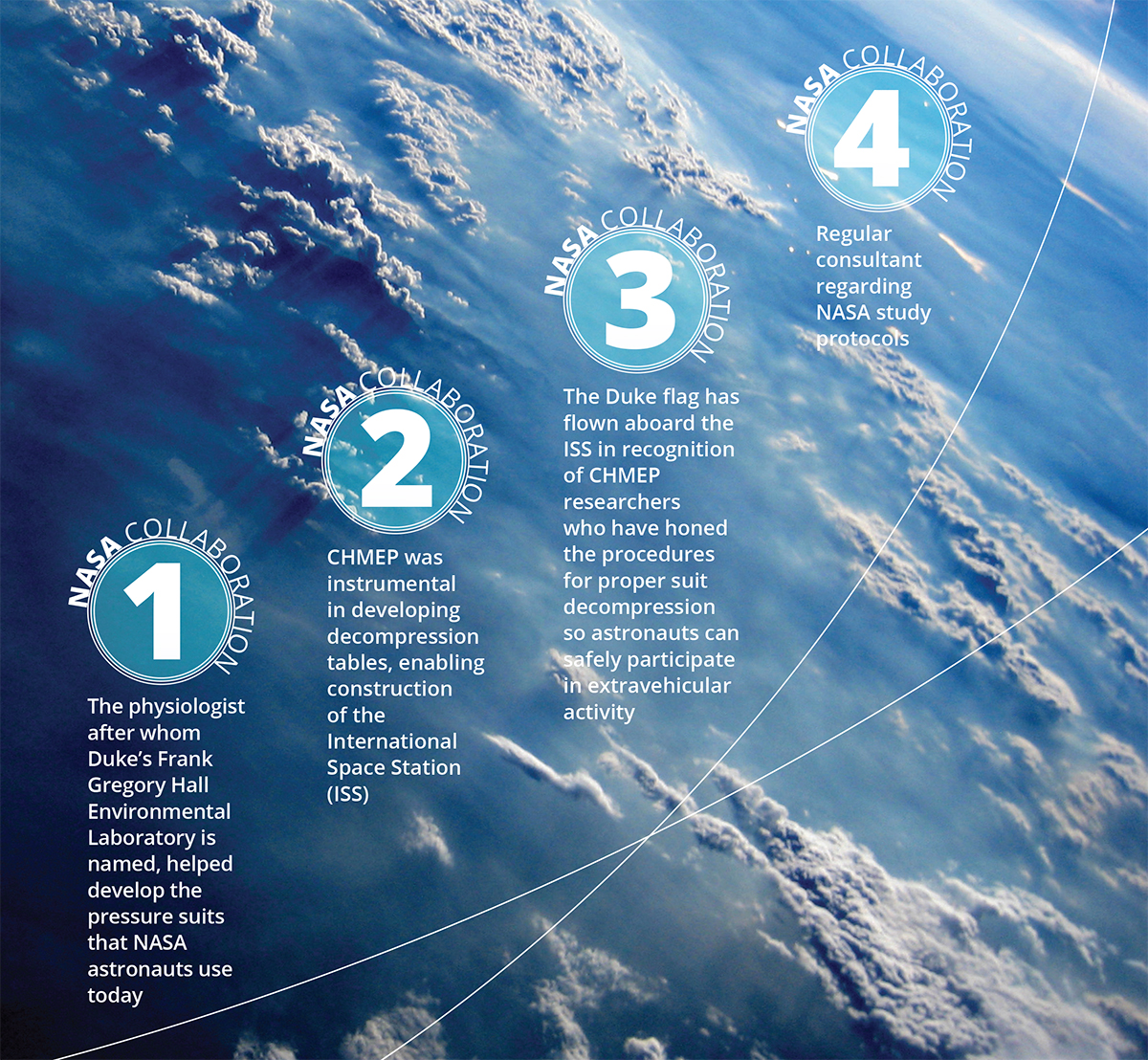 Extreme situations like space travel and diving aren’t the only scenarios where hypoxia and hypercapnia can occur. In clinical environments, patients suffering from conditions that inhibit breathing can trigger oxygen reduction and increased carbon dioxide in the body.

“People develop hypoxia for many reasons—such as pneumonia and COVID,” he said. “High carbon dioxide occurs in illness because the lungs aren’t working normally, or breathing is insufficient to get rid of the carbon dioxide that body tissues are making.”

While astronauts—who are generally healthy and in peak physical condition— would likely only need supplemental oxygen to overcome hypoxia or hypercapnia, in a clinical setting, more extensive remedies are generally employed.

“Giving oxygen is one way to treat it, and mechanical ventilation is another,” Moon said. “In the hospital, you give small amounts of oxygen, and if that doesn’t work, you administer increasing concentrations. If that isn’t sufficient, you can give them CPAP, which works for some people, but a lot of people require mechanical ventilation after inserting a tube into the trachea.”

Over the four decades that Moon has been at Duke, he has seen significant advances in the understanding, prevention and treatment of hypoxia, both in extreme environmental and clinical scenarios. And with altitude-related hypoxia, Moon said one of the big questions his work aims to answer is how can humans adapt to high altitude conditions without experiencing adverse consequences of hypoxia.

“We know if you take someone to 29,000 feet they lose consciousness within a minute or two, and yet people have actually climbed Mount Everest at 29,000 feet without oxygen, so how does that happen?” he said.

According to Moon, one of the instances that may hold answers to that question is the rapid adaptation process that happens to babies at birth. While in utero, babies live in a hypoxic environment, but upon birth, their bodies quickly adapt to the oxygen-rich environment outside the womb.

“They lose that adaptation very rapidly,” he said. “We’re still working on how that happens and ways to reverse it, to bring back hypoxic adaptation.”

Moon said unlocking how that adaptation process works could not only help humans better adjust to altitude, but it also could positively impact patient care in clinical settings.

“Imagine the therapeutic advantages of being able to administer a drug to a hypoxic patient in order to induce tolerance to hypoxia,” he said. “That would have huge implications for critical care medicine.”

That intersection between the critical care arena and extreme environmental applications continues to drive Moon’s work. And while uncovering those potentially life-saving clinical developments continues to be the ultimate goal, opportunities like contributing to civilian space missions reminds Moon that his work has far-reaching implications.

“While studying extreme environments like diving and altitude may seem like niche activities, it’s surprising how often the observations help us take care of patients.”

View this Story on Issuu