Acute kidney injury (AKI) is one of the most common forms of perioperative organ injury occurring in up to 30 percent of postsurgical patients, and it significantly increases morbidity and mortality. A number of vascular and transplant surgeries require interruption of blood flow to the kidney, rendering the kidney ischemic and causing significant metabolic stress. The timing of this kidney insult is known; thus, the possibility exists to intervene to protect the kidney. However, no treatment options exist to prevent or treat postsurgical AKI. The development of kidney protective therapeutics has the potential to greatly improve outcomes in the millions of people who undergo surgical operations and kidney transplants each year.

The long-term goal of Dr. Jamie Privratsky’s laboratory is to develop kidney protective therapeutics to limit postoperative and critical illness AKI. One such therapy could be to limit mitochondrial stress as the kidney is particularly susceptible to mitochondrial stress due to its high metabolic demands. In fact, the kidney has the second highest mitochondrial content of all organs and mitochondrial dysfunction has been highly implicated in the pathogenesis of AKI. As such, the development of mitochondrial protectants that could limit postsurgical and transplant AKI holds considerable promise.

SPECIFIC AIM 2: To determine the role of mitochondrial necrosis in ANXA1sp-mediated kidney protection. 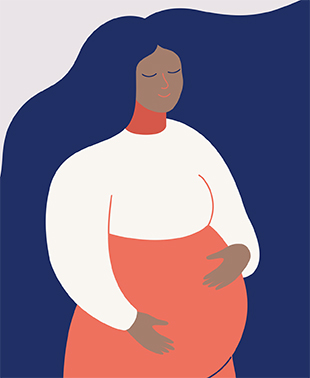 The United States has the highest rate of maternal mortality of all developed nations. Maternal sepsis is one of the leading causes of maternal death in the United States. Most of these deaths are preventable and occur due to delays in recognition, treatment and escalation of care. Since 1987 when the Centers for Disease Control and Prevention started monitoring the causes of maternal deaths, there has been no noticeable improvement in the proportion of patients who died from sepsis. This is especially concerning since there have been overall advancements in sepsis care that have not transferred to care of pregnant patients. Additionally, there are stark disparities in race and ethnicity of pregnant patients most affected by maternal sepsis.

This project partners community members with scientists each step of the way. First, the investigators composed a Maternal Sepsis Community Leadership Board of maternal sepsis survivors, sepsis advocates, birth equity advocates, and community members heavily invested in improving the health and equity of pregnant patients in their community, guided by Dr. Kendra Smith, community engagement expert. This community leadership board has an equal seat at the table providing input on the qualitative work, quantitative analysis and implementation of the maternal sepsis safety care bundle. 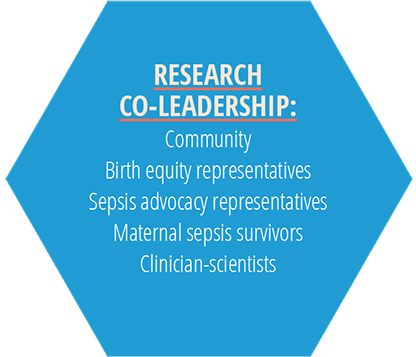 Community engagement is crucial to advancing the science forward by having those most affected by sepsis and inequity provide input and guidance on what is best to improve care. Community involvement has been key in the past few decades to improve the care for patients with Human Immunodeficiency Virus (HIV), provide outreach, and provide input on preventative feasible strategies that would be accepted in their own communities. This partnership between scientists and community members provides an invaluable opportunity to conduct science with feedback at each step from those with lived experience from sepsis, advocates for patients with sepsis, advocates to improve equity in care, and those living in the communities where we are working to improve care.

Initially, investigators will conduct qualitative interviews and focus groups to determine patient barriers to care and provider barriers to implementation. Their community partners will co-create the interview guides with their qualitative experts and receive feedback from implementation science experts and their Clinical Advisory Board. The themes obtained from the focus groups/interviews will allow the multidisciplinary team to determine how best to modify the sepsis safety care bundle to address these barriers. Next, investigators will validate the sepsis screening for maternal sepsis and explore diagnostic criteria for sepsis in pregnancy. The Community Leadership Board will provide input on the thresholds chosen. Investigators will negotiate a balance between not missing patients, but not having a high percentage of false positives. The goal is to not miss any patients, but also strike the balance between not having so many false positives that hospitals refuse to use the screening due to overuse of resources. Once investigators have identified themes from the qualitative work, the community leadership team and scientists will work with the implementation scientists to apply implementation strategies to address the barriers and modify the sepsis safety bundle for racial/ethnic disparities and rural/urban hospital differences. Screening thresholds will be adjusted based on optimized sensitivity and specificity.

The next phase of the grant is implementation across the states of California and Michigan. The modified bundle will be implemented and have modifications for community, rural, academic, and urban hospital settings. The barriers due to race/ethnicity, setting, socioeconomic status, will also have specific care plans for the bundle. Each hospital will be assigned a team of champions (doctors, nurses, community partners) to help with implementation barriers and provide expertise specifically for reducing disparities. Data flows from each state will be provided monthly for each region with specific data on outcomes stratified by race/ethnicity. This data will be evaluated and direct feedback provided with access to the team champions to provide strategies to improve care.

By treating community partners as equal members of the scientific team, investigators are making sure that equity is at the forefront of this work, with the end goal that this model serves as an example for other types of interventions to reduce maternal morbidity and mortality.

Up to 40 percent of the more than 19 million older Americans who undergo surgery each year will develop postoperative delirium, a fluctuating disturbance in attention and consciousness associated with increased one-year postoperative mortality, decreased quality of life, and increased long-term risk for Alzheimer’s disease (AD) and related dementias. Despite this substantial morbidity and mortality associated with postoperative delirium, there are few if any FDA-approved drugs to prevent it, largely because we still know very little about the underlying pathophysiology of delirium.

AIM 1: Determine the extent to which OSA severity is associated with preoperative BBB breakdown.

AIM 2: Determine the extent to which BBB breakdown is associated with postoperative delirium severity.

BBB breakdown in older surgical patients (who are at risk of postoperative delirium) could also occur secondary to obstructive sleep apnea (OSA), a frequently undiagnosed disorder of repeated breathing interruptions (apneas and hypopneas) during sleep. OSA prevalence sharply increases with age, occurring in about 50 percent of older adults. OSA can be diagnosed with home sleep apnea tests, which determine the apnea-hypopnea index (AHI), a measure of OSA severity. OSA may contribute to postoperative delirium via BBB breakdown because 1) animal and in vitro models of OSA show BBB breakdown, and 2) patients with OSA have increased systemic inflammation, which can disrupt the capillary endothelial tight junctions necessary to maintain BBB integrity. Further, older OSA patients exhibit increased brain parenchymal water, which could be caused by BBB breakdown. OSA has also been associated with increased risk of mild cognitive impairment, dementia due to AD and accelerated AD neuropathologic progression. These findings suggest that OSA-related BBB breakdown before and/or after surgery could play a role in causing delirium. However, no prior studies have determined whether patients with OSA actually have BBB breakdown (i.e., increased Qalbumin).